Two Angus cows have been killed by wolves not more than 4 miles from downtown Jackson, Wyoming.

One was found dead on the morning of Aug 23 on the Bar B-C Ranch, cow belonging to the Waltons. 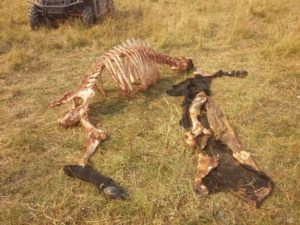 Investigation shows that approximately 20 wolves are in this pack, presumably from the five wolves who lived here all winter and their offspring born in May.

This location is 3 1/2 miles from downtown Jackson by google map, as the crow flies. Or rather, as the raven flies. When I went out to see the first cow yesterday afternoon, after it had been dead for a day and a half, three eagles flew off the carcass and about 20 ravens and some magpies. The bones were picked clean.

This wolf situation is going to get very serious very fast. 20 wolves in civilization near the town of Jackson, Wyoming are going to be hard to deal with. The US Fish and Wildlife Service cannot shoot them by helicopter for social/political reasons, poison is outlawed, and trapping is unacceptable for social/political reasons. Good luck trying to shoot them. After one or two has been shot the rest will be very wary.

Folks, your pets and livestock are now at serious risk. Of course ranchers will take it the hardest as their cows and horses are out in large pastures. (including our horses) But the wolves will scatter and be throughout the valley soon.