We ask Trump and Democrat leaders to promote civility and condemn violence.

Previously I issued the challenge, “If you have acts of violence and inciting to violence perpetrated by Republicans and Trump supporters I invite you to present them for our condemnation.  We will condemn.”  So far no one has actually produced proof that Trump has incited people to violence.

Some people have put forth things they claim Trump said to incite violence.  In investigating these claims, I don’t think they qualify.

One meme has a vicious-looking Donald Trump in the act of screaming and the blurbs around it say, 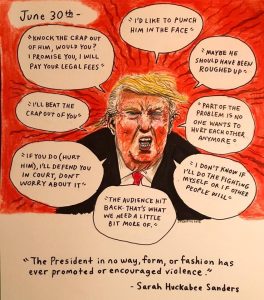 In the reports below I will reference the line pertaining to which blurb the quotes came from in the meme.

Some evidences of the statements above could be construed as President Trump encouraging violence.  Please read them in context below and where video-linked, watch Trump saying them. Contrast Trump saying it with Maxine Waters’ tirade urging Dems to “get in their face”.  IF these of Trump are incitements to violence, I condemn them in no uncertain terms and I ask that others on the Republican Right condemn them.  We ask President Trump to apologize for remarks which could be interpreted as inciting violence.  But read them and you determine if they warrant an apology.  We will leave it to the reader to decide.

Regarding the above allegations of Trump inciting violence, Lee Rowland, a senior staff attorney with the free-speech group ACLU wrote concerning a lawsuit stemming from a Trump rally in Louisville.  Rowland said, “Incitement charges have been used to jail anti-war protesters, labor picketers, Communists, and civil rights activists. Over time, the Supreme Court learned from these mistakes and adopted a very speech-protective test to determine when incitement has taken place … It’s a high bar for a reason, and Trump’s conduct at the rally didn’t meet it.”

I’ll leave it to the reader to determine if the above are warranted accusations against Trump for “inciting violence”.  If you think they are, please call the White House and demand an apology.  I, Jonesy, don’t believe he is inciting violence with the above statements.

So far no one has come forth and presented documented evidence of a conservative Republican on the Right committing violence as a direct result of being incited to violence by Republican leaders.  In contrast just in October there were more than 48 such incidents of violence or inciting violence against Republicans by Democrat leaders. https://www.breitbart.com/the-media/2018/07/05/rap-sheet-acts-of-media-approved-violence-and-harassment-against-trump-supporters/  Many in the media condone and encourage these acts of violence.  Some Republicans, including women, have been run out of restaurants and other places by Democrat Left radicals as a result of Democrat leaders deliberately inciting violence with their rhetoric, “get in their faces”.  We leave it to the reader to determine if such statements are actually inciting violence, in contrast to Trump’s statements.

The above authored and compiled by Maury Jones, AKA Jonesy, Jonesy@Reagan.com

Born and raised in Arizona. I've lived in Wyoming since 1983, currently in Jackson Hole. A lifetime of working with horses, taking tourists on trails in the high mountains, including scenic summer trips and fall hunting. I owned a gun shop for 5 years. I owned numerous other businesses over the decades. Active in conservative politics. So my "Cowboy Common Sense" draws on a LOT of life experiences.
View all posts by Jonesy →